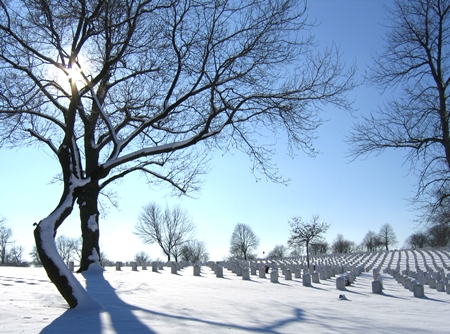 Wood National Cemetery is closed to new interments. The only interments that are being accepted are subsequent interments for veterans or eligible family members in an existing gravesite.

Wood National Cemetery is located on the grounds of a former Soldiers Home that today is called the Clement J. Zablocki VA Medical Center, Milwaukee, Wis.

From 1867 until 1871, the home buried its soldiers in private cemeteries in the Milwaukee area. In 1871, a cemetery opened on the grounds. Originally known only as Soldiers Home Cemetery, it wasn’t until 1937 the name was changed to honor Gen. George Wood, a longtime member of the Soldiers’ Home’s Board of Managers. It became a national cemetery in 1973.

The cemetery is part of the Northwestern Branch-National Home for Disabled Volunteer Soldiers National Historic Landmark district, designated on June 6, 2011.

A memorial pathway is lined with a variety of memorials that honor America’s veterans. As of 2003, there were seven memorials along there — most commemorating soldiers of 20th-century wars.

Ordinary Seaman James K. L. Duncan (Civil War). He received the Medal of Honor while serving in the U. S. Navy, on board the U.S.S. Fort Hindman for actions during the engagement near Harrisonburg, Louisiana, April 16, 1864. Duncan died in 1913 and is buried in Section 19, Site 41.

Sergeant Milton Matthews (Civil War). He received the Medal of Honor while serving in the U.S. Army, Company C, 61st Pennsylvania Infantry, for actions at Petersburg, Virginia, April 2, 1865. Matthews died in 1896 and is buried in Section 11, Site 61.

Boatswain’s Mate Michael McCormick (Civil War). He received the Medal of Honor while serving in the U.S. Navy, on board the U.S.S. Signal for actions in battle on the Red River, Louisiana, May 5, 1864. McCormick died in 1865 and is memorialized in Section MA, Site 10A.

Corporal Winthrop D. Putnam (Civil War). He received the Medal of Honor while serving in the U.S. Army, Company A, 77th, Illinois Infantry, for actions at Vicksburg, Mississippi, May 22, 1863. Putnam died in 1907 and is buried in Section 16, Site 109.

Other Burials
Section 8 contains private monuments marking the graves of civilians buried in the Wood National Cemetery. They include doctors who worked for the old Soldiers Home and their families. The largest monument marks the grave of General Kilbourn Knox, the sixth Governor of the Northwest Branch of the Home for Disabled Volunteer Soldiers who passed away on April 17, 1891 (Section 8, Site 7).

There are unknown soldiers interred in Section 4.

Wisconsin native Claude Buckley "Biff" Taugher was born in 1895 and attended Carroll College before serving in the U.S. Marine Corps during World War I. Second Lieutenant Taugher enlisted in May 1917 and deployed to France with the 6th Regiment (Marines), Second Division, American Expeditionary Forces (AEF). He received the Navy Cross and Distinguished Service Cross for bravery in action on November 2, 1918, in Bayonville; and the Silver Star for actions during the Meuse-Argonne Offensive. First Lieutenant Taugher was honorably discharged in August 1919 and he returned home to finish school. Taugher attended Marquette University where he played football and, in 1922, was signed by the Green Bay Packers. His professional football career as a player lasted one season, after which he coached the Carroll College team. Taugher died February 8, 1963, and is buried in Wood National Cemetery (Section 38A, Row 5, Site 17).

Sportsman and surgeon Clement Francis "Clem" Neacy was born in Wisconsin in 1898. He grew up in Milwaukee, where he attended school, worked for the Gas Company, and played baseball and basketball. He added boxing and football to his athletic repertoire by the time he enrolled in Colgate University (1921). Neacy played professional football through the 1920s and, off the field, studied to become a surgeon. He graduated from Rush Medical School in 1930 and held positions on the surgical staff of the Veterans Administration hospitals in Togus, ME (1931-34) and, back home, in Milwaukee (1937-43). Navy Lieutenant Commander Neacy served during World War II, after which he entered private practice in California. He died March 19, 1968, and is buried in Wood National Cemetery (Section 37A, Row 4, Site 9).

Donald "Donn" Draeger was born in Milwaukee, WI, in 1922 and as a child began a lifelong study of martial arts. He served in the U.S. Marines Corps as a signal officer from 1943 to 1956. Captain Draeger held the rank of major during a temporary assignment from 1952-1956, and saw combat duty in World War II and Korea. His postings to the Pacific Rim encouraged his interest in martial arts, and he taught judo while stationed in Korea. As a civilian he continued to travel in Asia and to promote judo in the United States and abroad; for example, he became the U.S. Amateur Athletic Union representative in 1964 in preparation for judo's debut as an Olympic sport that year. Draeger's research on human combative behavior, and his teaching and writing on Japanese martial arts, influenced a generation of practitioners. In popular culture, he advised the actors in the martial arts sequences of the James Bond movie You Only Live Twice. He died October 20, 1982, and is buried in Wood National Cemetery (Section 4, Site 377).

Michelle Marie Witmer (1984-2004) was the first female Wisconsin National Guard member killed in combat, and first from the Guard killed since World War II.  She lived with her family in New Berlin, WI, and she attended the University of Wisconsin, Madison. Witmer joined the Wisconsin National Guard in 2002.  Specialist Witmer served with the Guard’s 32nd Police Company in Iraq, where she was killed in an ambush on April 9, 2004.  Her after-hours volunteer work at a Baghdad orphanage inspired those who knew her, while her death brought attention to women and military service.  Witmer was buried in Wood National Cemetery on April 16 (Section 49, Site 179A).

More than half of VA's national cemeteries originated with the Civil War and many are closed to some burials. Other sites were established to serve World War veterans and they continue to expand. Historic themes related with NCA's cemeteries and soldiers' lots vary, but visitors should understand "Why is it here?" NCA began by installing interpretive signs, or waysides, at more than 100 properties to observe the Civil War Sesquicentennial (2011-2015). Please follow the links below to see the interpretive signs for Wood National Cemetery.