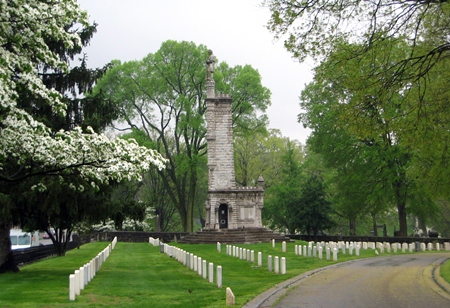 This cemetery has space available for cremated remains. We may be able to accommodate casketed remains in the same gravesite of previously interred family members.

The cemetery is located in the northern section of Knoxville. From the Knoxville Airport, travel Interstate 129 north approximately 12 miles to Interstate 275. Then travel north about two miles and exit at Baxter Avenue East to first stop light (Wray Street). Turn right and travel three blocks to cemetery.

Mountain Home National Cemetery administers this cemetery. Please contact them at the telephone number listed above.

Grave Location:
The grave location of your loved one is furnished on the map included in the burial document folder. There is a grave locator as you enter the main gate to assist weekend visitors who may not know the location of the gravesite.

Grave Marker:
A temporary grave marker is used to mark the grave following the interment. A permanent grave marker will be furnished free of charge by the Government without application from the family. Every effort is made to have the grave marker delivered and set within 60 days from the day of interment.

Christmas wreaths, grave blankets and other seasonal adornments may be placed on graves from Dec. 1 through Jan. 20.

Knoxville National Cemetery is located in Knox County, in the northern section of the city of Knoxville, Tenn.

Union Maj. Gen. Ambrose E. Burnside established the cemetery during the Civil War after the siege of Knoxville and subsequent Battle of Fort Sander.

Capt. E.B. Chamberlain, the assistant quartermaster, was assigned the task of designing the national cemetery at Knoxville. The first interments were remains exhumed from Cumberland Gap, Concord and many other regional sites. Chamberlain’s design and system for recording interments was so effective that, in 1866, Gen. E.G. Whitman, observed that the cemetery had been "the only burial ground of Union soldiers…originally laid out and conducted to the present time in a manner and on a system that render[ed] it suitable to be converted into a national cemetery without material alteration or change, or removal of a single body."

Knoxville National Cemetery was listed on the National Register of Historic Places in 1996.

Memorial and Monuments
The Union Soldier monument, known locally as the Tennessee or Wilder monument, is an unusual, large Gothic Revival-style memorial that was erected between 1890 and 1901.

Sergeant Troy A. McGill (World War II). He received the Medal of Honor posthumously for service in the U.S. Army, Troop G, 5th Cavalry Regiment, 1st Cavalry Division, in recognition of an intrepid stand in the Los Negros Islands, Admiralty Group, March 4, 1944. McGill was buried in the Air Force Mausoleum Manila No.1, Philippine Islands; his remains were reinterred on January 25, 1951, in Section B, Site 6294.

Private Timothy Spillane (Civil War). He received the Medal of Honor while serving in the U.S. Army, Company C, 16th Pennsylvania Cavalry, for actions at Hatcher's Run, Virginia, February 5-7, 1865. Spillane died in 1901 and is buried in Section A, Site 3319.

Other Burials
Among those interred at Knoxville National Cemetery is Brigadier General Robert Reese Neyland, retired US Army. While General Neyland was attending West Point Military Academy, he was an aide to the Commandant of West Point, General Douglas Macarthur. After he assumed his military duties he was assigned as an ROTC instructor at the University of Tennessee, where he also served as football coach. During World War II General Neyland was recalled to serve his country. He was elevated to the rank of Brigadier General at that time and was one of the top-ranking officers in the China-Burma-India field of operation. Brigadier General Robert Reese Neyland and his wife Ada are interred in Section X, Site 16A.

More than half of VA's national cemeteries originated with the Civil War and many are closed to some burials. Other sites were established to serve World War veterans and they continue to expand. Historic themes related with NCA's cemeteries and soldiers' lots vary, but visitors should understand "Why is it here?" NCA began by installing interpretive signs, or waysides, at more than 100 properties to observe the Civil War Sesquicentennial (2011-2015). Please follow the links below to see the interpretive signs for Knoxville National Cemetery.