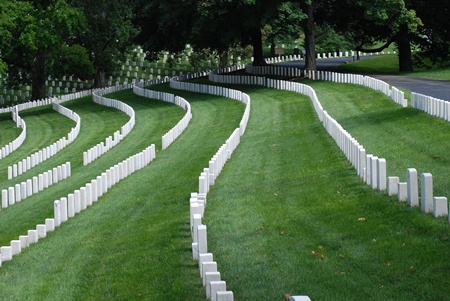 Cave Hill National Cemetery is closed to new interments. The only interments that are being accepted are subsequent interments for veterans or eligible family members in an existing gravesite. Periodically however, burial space may become available due to a canceled reservation or when a disinterment has been completed. When either of these two scenarios occurs, the gravesite is made available to another eligible veteran on a first-come, first-served basis. Since there is no way to know in advance when a gravesite may become available, please contact the cemetery at the time of need to inquire whether space is available.

From Louisville Standiford Field, take Interstate 65 north to Broadway (east) exit. Turn on Baxter Avenue to cemetery entrance. Cemetery is located in the confines of the Cave Hill Cemetery.

Cave Hill National Cemetery is located in the northwest corner of Cave Hill Cemetery in Louisville, Ky. The original 0.65-acre site was donated by the Cave Hill Cemetery Co. in 1861 for the burials of Union soldiers who died in service. Additional acreage was added in 1863, 1864, 1867 and 1897 through donation and purchase.

While the site was officially established as a national cemetery in 1863, the first interment occurred in November 1861. The initial burials were soldiers who had died at camps and hospitals in the Louisville area. In spring 1867, 732 remains gathered from various points along the Louisville and Nashville Railroad were interred at Cave Hill, primarily in section D. Interments include African-American U.S. Colored Troops and soldiers of the Confederate army.

In 1867, the United States purchased an additional 0.22 acres around the corner from the cemetery as the site for a superintendent's lodge built in the Second Empire style, based on drawings by Quartermaster General Montgomery C. Meigs. Although the U.S. Army sold the lodge in 1940, it remains extant on Baxter Avenue.

Historically, Memorial Day and other commemorative events centered around a raised rostrum where officials and speakers sat. A picturesque stone rostrum with a dozen Doric columns was erected next to the pond here in 1898. Cast-iron tablets with portions of verse from poem "Bivouac of the Dead," erected in the 1880s, are scattered throughout the burial sections. A cast-iron Gettysburg Address plaque was installed in 2009; it is a replica of the version placed in national cemeteries about 1909.

The larger, private Cave Hill Cemetery has been the pre-eminent burial ground in Louisville since it was dedicated in 1848, and it remains a premier example of Rural style cemetery design in the United States. The site's natural rock outcroppings and hilly topography have been complemented with ponds, statuary, and architecturally elegant tombs. More than 500 kinds of trees and garden plantings are maintained in this naturalistic oasis.

Monuments & Memorials
The Unknown Soldiers Monument, a rustic boulder marked with a plaque, was erected in the corner of Section D in 1914.

Eleven soldiers of the 32nd Indiana Infantry, a regiment entirely comprised of German-Americans, are interred in Section C. The troops perished in The Battle of Rowlett's Station, Kentucky on December 17, 1861, and were originally buried near the battlefield. While the regiment bivouacked in the area after the battle, Private August Bloedner carved an upright monument to mark their graves, bearing a carved American eagle and the following inscription in German:

Here lie men of the 32nd First German Indiana Regiment sacrificed for the free Institutions of the Republic of the United States of North America.

They fell on 17 Dec. 1861, in an Encounter at Rowlett Station, in which 1 Regiment of Texas Rangers, 2 Regiments of Infantry, and 6 Rebel Cannons, in all over 3000 Men, were defeated by 500 German Soldiers.

The state of Kentucky recognized the sacrifice of these men by purchasing the ground in which they were buried. In 1867, with the approval of Indiana's governor, the remains of the soldiers and the monument were moved to Cave Hill National Cemetery. The 32nd Indiana Infantry Monument was subsequently mounted on a new base contributed by Louisville's German citizens.

The 32nd Indiana Infantry Monument is the oldest Civil War monument. Carved from a local limestone outcrop, by the 1950s the monument was showing signs of deterioration. By the early 2000s approximately 50 percent of the inscription was lost. To preserve the monument, in late 2008 NCA moved it to an indoor facility where it received professional conservation. In summer 2010, NCA relocated the 32nd Indiana Infantry Monument to the Frazier History Museum in downtown Louisville for public display.

To continue to honor the men of the 32nd Indiana Infantry buried in Cave Hill National Cemetery, NCA commissioned a successor monument. Hand-carved from durable Indiana limestone by the John Stevens Shop, the new monument dedicated in 2011 is the same size and form as the original, but it features a translation of the German inscription on the back.

Learn more about the 32nd Indiana Infantry Monument and its conservation and replacement.

More than half of VA's national cemeteries originated with the Civil War and many are closed to some burials. Other sites were established to serve World War veterans and they continue to expand. Historic themes related with NCA's cemeteries and soldiers' lots vary, but visitors should understand "Why is it here?" NCA began by installing interpretive signs, or waysides, at more than 100 properties to observe the Civil War Sesquicentennial (2011-2015). Please follow the links below to see the interpretive signs for Cave Hill National Cemetery.