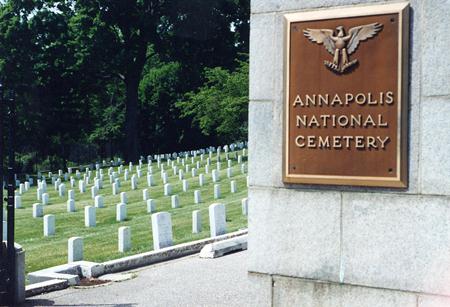 Office Hours: This cemetery is supervised by Baltimore National Cemetery.

Annapolis National Cemetery is closed to new interments. The only interments that are being accepted are subsequent interments for veterans or eligible family members in an existing gravesite. Periodically however, burial space may become available due to a canceled reservation or when a disinterment has been completed. When either of these two scenarios occurs, the gravesite is made available to another eligible veteran on a first-come, first-served basis. Since there is no way to know in advance when a gravesite may become available, please contact the cemetery at the time of need to inquire whether space is available.

The Baltimore National Cemetery supervises this cemetery. You can contact them at the number listed above.

The placement of floral items on graves other than on the day of interment is subject to the following conditions:

1. Fresh cut flowers may be placed on graves at any time. Temporary flower containers (vases) are available in bins throughout the cemetery.

2. Floral items will be removed from graves as soon as they become faded or unsightly.

3. Artificial flowers may be placed on graves only during the period of October 10 through April 15.

5. Christmas wreaths or grave blankets are permitted on graves during the Christmas season and will be removed not later than January 20th of each year. Contact the cemetery staff for the exact date of the post-holiday cleanup. Grave floral blankets may not be larger in size than two by three feet.

6. During the lawn mowing and ground maintenance season (April – November), all floral items will be removed from graves on the 2nd and 4th Friday of the month.

7. Balloons, statues, vigil lights (solar or battery powered), breakable (glass) objects of any nature, spinners, and similar/other commemorative items are not permitted on graves at any time.

8. Floral items and other types of decorations will not be secured to or placed on headstones or markers. Gravesite items cannot be taller than the surrounding headstones and markers.

If there are any questions regarding the floral policy or cleanup schedule please contact the cemetery staff at 410-644-9696.

Annapolis National Cemetery is located in Anne Arundel County, within the city limits of Annapolis, Md. Annapolis was one of the 14 national cemeteries established by President Abraham Lincoln in 1862. The original land was leased in Aug. 1862 from a local resident, Nicholas Brewer, for a period of 99 years. Five years later, Brewer’s heirs sold the land outright to the federal government.

During the Civil War, Annapolis was the site of a Union training and recruiting center. Despite the government’s best efforts to keep the camps sanitary, a large number of men died due to illnesses such as small pox and typhoid, as well as accidents and violence. As a result, most original interments at the cemetery were men who died at the training camps or nearby hospitals.

Annapolis also had a role in the exchange of prisoners between Union and Confederate sides. As early as the War of 1812, there was a well-established practice of paroling prisoners of war so neither side incurred the expense of holding and maintaining the others’ troops for an extended period. While City Point, Va., was the official exchange location, Confederate prisoners were held at Annapolis while arrangements were negotiated. Conversely, Union soldiers held by the Confederacy were often moved to the hospital at Camp Parole, near Annapolis, after their release. At least 24 men buried at Annapolis National Cemetery were former Confederate POWs who died in captivity.

Annapolis National Cemetery was placed on the National Register of Historic Places in 1996.

More than half of VA's national cemeteries originated with the Civil War and many are closed to some burials. Other sites were established to serve World War veterans and they continue to expand. Historic themes related with NCA's cemeteries and soldiers' lots vary, but visitors should understand "Why is it here?" NCA began by installing interpretive signs, or waysides, at more than 100 properties to observe the Civil War Sesquicentennial (2011-2015). Please follow the links below to see the interpretive signs for Annapolis National Cemetery.